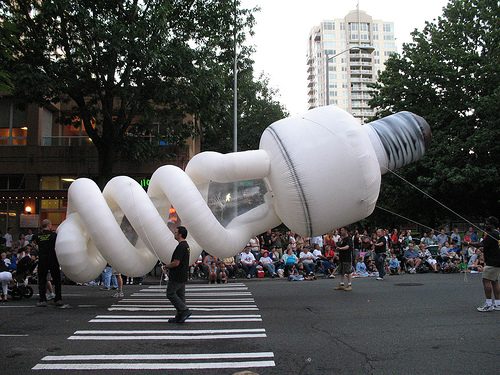 The college gives away Compact Fluorescent Lights, so why not limit the amount of energy you use in your dorm room by simply installing them in your desk lamp?

Having recognized the major energy savings of using Compact Fluorescent Lighting (CFLs) (they use about a quarter of the energy used by traditional incandescent bulbs), the college has put CFLs in most light fixtures around campus (including dorm rooms) in the last few years. Because the college cannot control the type of bulbs students use in their personal lamps, Facilities simply gives CFLs to students for free. Call Facilities at x 4133.

As a CFL user, there are a few things you should know. While naturally CFL use minimizes the amount of the pollutants (including mercury) pumped out of power plants, the CFLs themselves do contain trace amounts of mercury. While not a huge safety hazard, there are certain precautions you can take in the event that a CFL breaks or if you would simply like to get rid of them once they burn out.

If your CFL breaks, the some of the mercury may evaporate into the air and disappear—you can speed along this process by opening a window. The remainder of the mercury will likely remain stuck in the bulb. Instead of using a vacuum, collect the broken shards with a paper towel and then seal the pieces of broken bulb and the paper towel in a plastic bag. Students can then contact facilities (x4133) to ask them to properly dispose of the plastic bag and its contents.

If your CFL burns out (an infrequent occurrence since CFLs generally last for years) it should not go in either regular trash or recycling. Instead, place it in the recycling bin designated specifically for CFLs that will soon be located in Sayles.

For more information on the advantages of CFLs, which kind to buy and CFL safety, check out this page at the Environmental Defense Fund Website