A College on a Prairie? 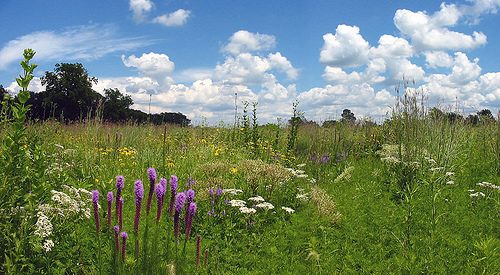 While it is easy to justify the use of native plantings near and around the Arboretum at Carleton, some argue that prairie restoration patches closer to central campus are inappropriate and a nuisance. Depending on the season, prairie can look like dry weeds and it also requires regular burning to maintain. What should the landscape on campus look like? A well-irrigated golf course? An ornamental garden? Native prairie? The jury is still out.

As Carleton enters into a new phase of construction with a new Arts Building and one or more dormitory projects, the College is increasingly forced think about space. Believe it or not, space is limited on our campus. As a result, the placement of every landscape feature, ranging from our large recreation center to the kale now sitting in the Sayles planters, is intentional. Given the pending expansion of the Carleton student body, it is in the college’s best interest to maintain green space as well as to make the green spaces it has more green. How does the college incorporate sustainability into its landscaping operations? While Carleton does not have a specific provision in its landscaping operational guidelines that formally incorporates sustainability, there is an intentional effort to do so.

First and foremost, Carleton strives to use plants native to southeastern Minnesota in its design scheme. According to an unofficial landscaping document drafted in the summer of 2007, the campus is divided into a variety of zones, each with their own design parameters (vegetation choices and placement, maintenance specifications, etc). Vegetation in Zone 1 (which encompasses the Rec Center/ Goodhue building sites) is expected to consist of species native to southeastern MN. Non-native plants are to be used sparingly and only when similar native species are not available in the proper size, form, or quantity. Vegetation in Zones 2 and 3 (the Arboretum Corridor and the Arboretum itself) are even more specified. Plants in these areas are limited to vegetation common to Rice County and, in the Arb, should be arranged “randomly or in associations typically found in the area”. The fourth and last landscaping zone includes campus and off-campus properties. This zone is perhaps the most important and the most difficult to design. With respect to Zone 4, the unofficial landscaping document states, “While there are no established limitations regarding the use of non-native plant material, it is understood that responsible and sustainable landscaping practices favor the selection and predominant use of fully hardy species native and adapted to the region.”

For now, Carleton plans to look into the feasibility of permeable pavement to reduce storm water runoff, the use of native prairie as an ornamental landscaping element, and ways in which chemical usage can be reduced or altered. Until a sustainable operations framework is developed to guide landscaping decision-making, Carleton will continue to make decisions based on what it deems is maintainable, aesthetically pleasing, and environmentally sound.