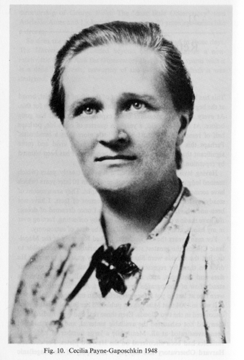 Cecilia Payne was born in Wendover, England in 1900. In 1919 while at Newham college at Cambridge, she became interested in astronomy after hearing a lecture by Professor Eddington about his eclipse expedition to Brazil. Because astronomy continued to be seen as a branch of mathematics she was unable to change her major field of study to astronomy from physics. She continued however to attend Eddington’s lectures. When she finally confessed her wish to become an astronomer to Eddington his response was, “I can see no insuperable objections.” After graduating from Cambridge she became concerned about the future for women in astronomy careers in England. She chose to head toward the United States where she thought a woman might be more accepted. She received a fellowship to study at Harvard Observatory and so she headed across the seas to continue her career. 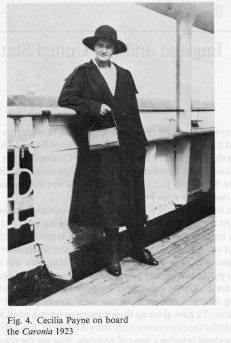 Payne quickly settled in among the women at the Harvard Observatory, working there under the director Harlow Shapley. She quickly began an investigation of the stellar spectra being compiled for the Henry Draper catalog. In 1925 Cecilia Payne became the first person, woman or man, to receive an Ph.D. in astronomy from Harvard. Shapley had attempted to get her a Ph.D. in the already existing physics department, but the chair refused. To get around this roadblock she received her Ph.D. in astronomy instead. Her thesis, later published as the observatory’s first monograph, Stellar Atmospheres, A contribution to the Observational Study of High Temperature in the Reversing Layer of Stars was labeled at the time and for many years afterwards as “the most brilliant Ph.D. thesis ever written in astronomy.” In this thesis Payne calculated a temperature scale to match the classification system which Annie Cannon had developed. She also theorized about the composition of the stars. She suggested that the stars were mostly hydrogen. However, when Eddington heard this theory he told her that she was wrong because astronomers at the time felt that all celestial bodies had very similar compositions. As a result, Payne wrote in her thesis that her results were improbable and probably wrong. Today, of course, we know her results were actually fairly accurate. 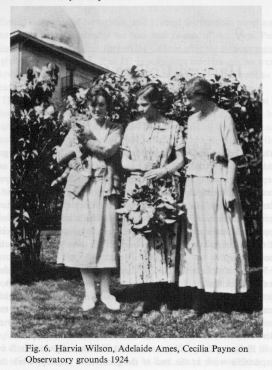 After her fellowship was finished, Payne was hired by Harvard and worked with the various other women then employed at the Harvard Observatory. In 1932 Payne began a tour of Europe visiting various observatories around the continent. Her final destination was Berlin for the meeting of the Astronomische Gesellschaft. She documents in her autobiography the conditions both in Russia and in Nazi Germany at the time. While in Berlin she met a young Russian Astronomer Sergei Gaposchkin and heard his plight as a Russian Astronomer in Nazi Germany. She resolved to help him get out of Europe. She found him a position at Harvard and he arrived in November 1932. Less than two years later in March 1934 Sergei and Cecilia were married. 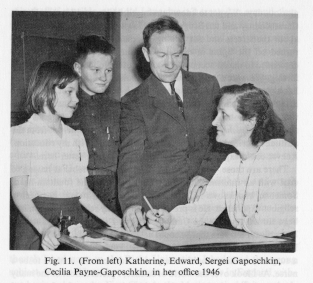 Cecilia continued to publish and wrote several other books, some of them coauthored by her husband. Payne, with Annie Cannon, eventually received the title of Astronomer from Harvard . Despite the fact that she lectured at the University, it was not until the 1950s that Payne received the title of Professor and eventually Chair of the Astronomy Department at Harvard. Cecilia Payne-Gaposchkin is one of the great women astronomers of this century.

Much of the information for this page as well as the photos come from Cecilia Payne’s autobiography edited by her daughter.

Other interesting books include:

Return to Michele and Margaretha’s Women in Astronomy Page.