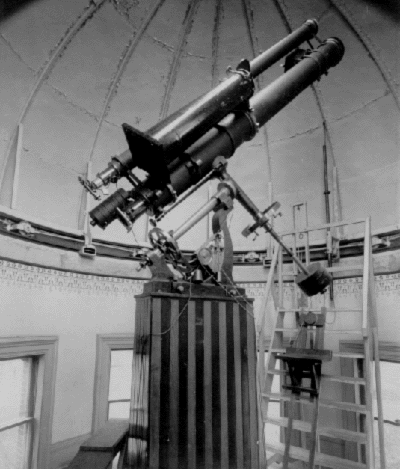 This telescope was top of the line when it was first installed in 1877. It now occupies the smaller dome in the observatory. 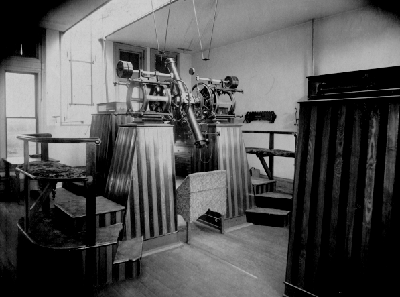 This 3″ telescope can only look on a straight line from north to south and was used to keep precise time. Astronomers at Goodsell would calibrate their clocks by watching when certain stars would pass directly overhead and then the time would be telegraphed out to railroads all over the western United States. This service was provided until atomic clocks were implemented in the 1930s. The telescope currently sits unused in Goodsell’s library.

Carleton has several portable telescopes for outdoor observing on the polar-aligned piers behind the observatory. These are mostly 8″ Schmidt-Cassegrain telescopes with computer control and tracking, but there is also a 10″ model that gathers more than 50% more light and is sometimes brought out for special occasions.

These monochrome CCDs were purchased in the summer of 2015 for use in the Observational Astronomy class. They have an 8.3 megapixel resolution with 5.4 micron square pixels and high quantum efficiency. In addition, they have an FW5-8300 filter wheel with LRGB filters to allow for multiple images through different filters to be stacked to create a color composite image. Their cooling system chills the sensor to 40 degrees C cooler than ambient temperature to reduce thermal noise. They attach to the outdoor telescopes for imaging throughout the year.

The Astronomy department has two top of the line mid-size CCDs for use in special projects. These use the same sensor as the STF-8300M CCDs but have a more robust cooling system (55 degree delta), an FW8-8300G filter wheel with narrow-band emission line filters and a off axis autoguiding CCD, and SBIG adaptive optics. All of these improvements lead to higher image quality.

Goodsell still has many of its older CCDs, including SBIG ST-2000XM cameras with five position filter wheels that were purchased in 2005 and SBIG ST-6 cameras purchased in 1996. One of the ST-2000 cameras is mounted to a spectroscope that can be attached to the telescopes.