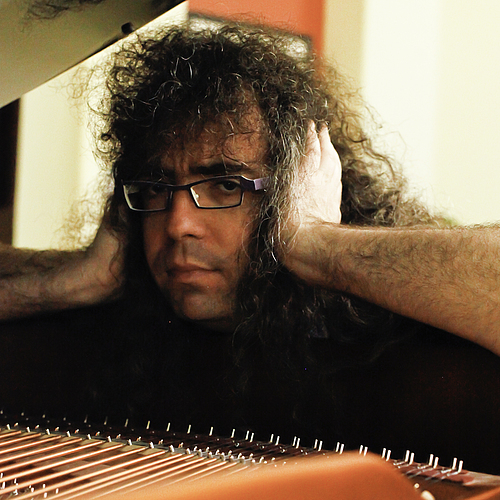 Composer, Carleton alumnus (’89), and former trustee Mark Applebaum will serve as Benedict Distinguished Visiting Professor during Fall, 2021. He is the Leland & Edith Smith Professor of Composition at Stanford University where he has taught since 2000. Applebaum refers to his experimental music as “uncompromising and unmarketable.” His enigmatic 72-foot long pictographic score The Metaphysics of Notation will be shown concurrently in the Perlman Museum, with performances by various interpreters throughout the term. Applebaum is also a jazz pianist and inventor of sound-sculptures, instruments made of junk, hardware, and found objects mounted on electroacoustic soundboards. His TED talk on boredeom in music has been seen by over 5 million viewers (or, quite possibly, his mom 5 million times). At Carleton he will teach a course on popular music called Rock, Sex, & Rebellion.

Applebaum’s solo, chamber, choral, orchestral, operatic, and electroacoustic work has been performed throughout North and South America, Europe, Australia, Africa, and Asia, including notable commissions from the Merce Cunningham Dance Company, the Fromm Foundation, the Spoleto Festival, the Kronos Quartet, Chamber Music America, and the Vienna Modern Festival. Many of his pieces are characterized by challenges to the conventional boundaries of musical ontology: works for three conductors and no players, a concerto for florist and orchestra, pieces for instruments made of junk, notational specifications that appear on the faces of custom wristwatches, works for an invented sign language choreographed to sound, amplified Dadaist rituals, a chamber work comprised of obsessive page turns, and a 72-foot long graphic score displayed in a museum and accompanied by no instructions for its interpretation. At Stanford University Applebaum is the founding director of [sic]—the Stanford Improvisation Collective.