Former Carleton professor Ian Barbour returned to Carleton to lecture on the relationship between religion and science. 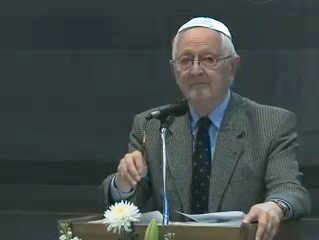 Memorial service led by Rabbi Shosh Dworsky, with guest speaker Walter Schwarz. Schwarz, a Romanian Jew, emigrated to the U.S. in 1940. Two years later he was drafted into the U.S. army, and because of his fluent German was selected to train at the Military Intelligence Training Center at Camp Ritchie, Maryland. After D-Day 1941 the “Ritchie Boys” were deployed in Europe, many to the very countries from which they had fled, to help bring about the eventual Nazi surrender.

The presentation, explains Barbour, begins “with authors who believe in God but not evolution, such as creationists and exponents of Intelligent Design, and others who believe in evolution but not God, such as the biologist Richard Dawkins and the New Atheists,” and continues with an exploration of several ways to affirm both God and evolution.