The Every Carl for Carleton campaign ended on June 30, 2021. Learn about its impact.

A Passion for Music 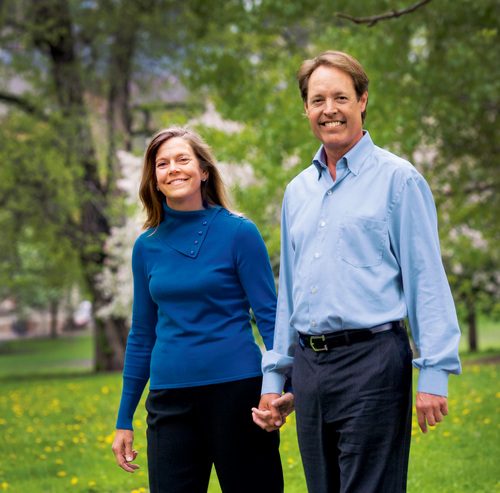 Music, Rich Kracum feels, is an essential component of a liberal arts education. And a liberal arts college is the perfect setting for experimenting with new musical forms, just as it is for sampling many subjects and discovering new passions. Performing and enjoying music at Carleton — and sharing those moments with his wife, Laurie — were an important ingredient to Rich’s student experience. Now, as an expression of their love for music and Carleton, the Kracums have made a signal gift to the college in support of the Kracum Performance Hall.

The Kracums have a long history of supporting the college; Rich first became a trustee in 2001 and serves on the Campaign Core Committee. In 2011 they donated funds to install a wind turbine, reflecting Laurie’s passion for the environment.

Rich and Laurie were both active in musical productions on campus as students — Rich’s favorite was Anything Goes. They also attended concerts and tried to access “as much music as possible,” he says, adding, “fortunately, we still do.” Splitting their time between Chicago and Miami, the couple frequently attend symphonies, opera productions, jazz and blues performances, and rock concerts.

That variety is part of why music is so enriching, Rich says, and he’s pleased that Carleton has invested in a new music and performance commons to expand its capabilities to showcase diverse musical tastes. “Music is a wonderful tool for students’ development,” he says. “It allows them to have opportunities to work with people of varying backgrounds — they may have differences in style preferences but find common ground in their love for music.”

The value of a liberal arts education, Rich says, is that it teaches students to think critically while encouraging creativity. And Carleton, in particular, he says, excels at that. Through its administration, faculty, and students, Carleton has fostered a critical yet creative culture that remains surprisingly constant from when Rich and Laurie were students in the 1970s to when their son, John Kracum ’07, was a student in the early 2000s to today.  Rich says this unique culture is made up of more than just intelligence and curiosity; it’s a willingness to share ideas in an atmosphere untainted by arrogance
and cutthroat competition.”

“As a trustee, I see how this wonderful culture of Carleton has maintained itself over the years. And music is a part of that. It trains you how to think and blossoms everyone’s creativity.“

Return to Gifts at Work